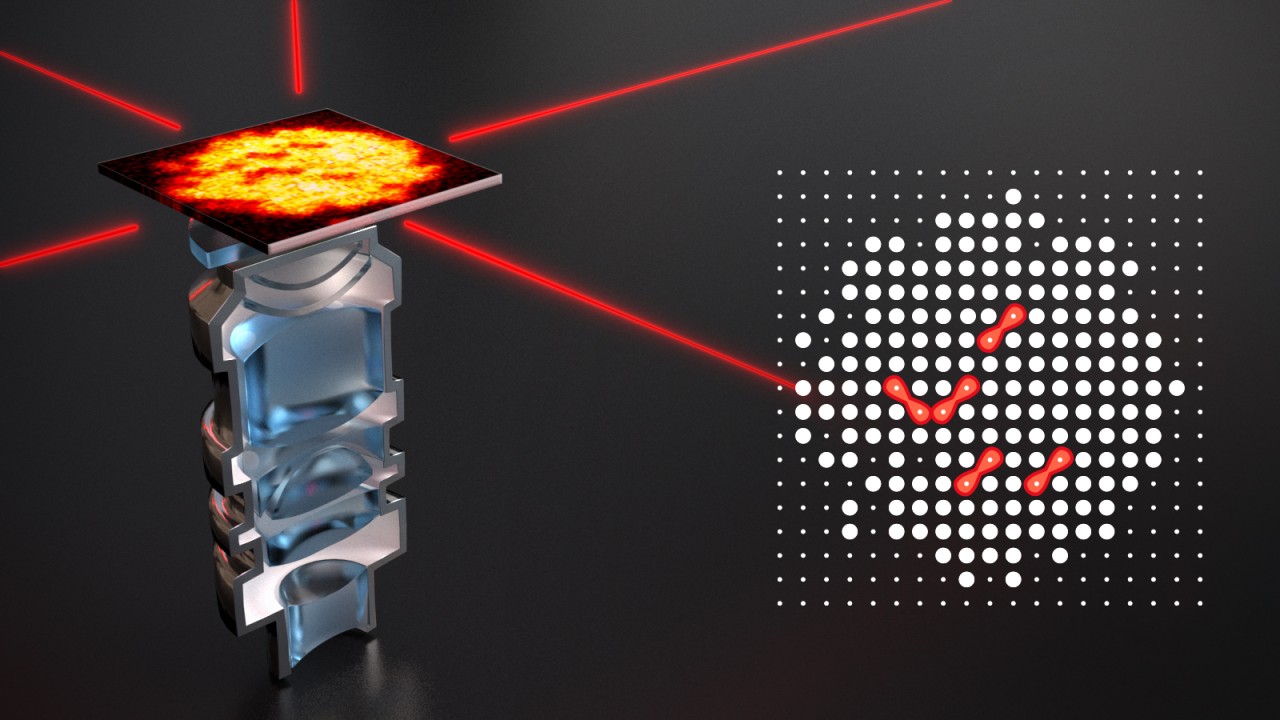 Physicists at the Max Planck Institute for Quantum Optics (MPQ) achieved to form giant diatomic molecules and optically detect them afterwards by using a high-resolution objective.

The tiny size of conventional diatomic molecules in the sub-nanometer regime hinders direct optical resolution of their constituents. Physicists from the Quantum Many Body Division at MPQ led by Prof. Immanuel Bloch were able to bind pairs of highly excited atoms at a distance of one micrometer. The huge bond length — comparable to small biological cells like the E. coli bacteria — allows a microscopic study of the underlying binding structure by directly optically resolving both bound atoms.

The small size and the interaction of all contributing electrons make it very complicated to experimentally and theoretically study molecular bonds in a highly detailed manner. Even the mere structure of atoms, the fundamental building blocks of chemical bonds, cannot be calculated analytically. Only the hydrogen atom, which is the first and simplest element in the periodic table consisting only of a single proton and a single electron, can be calculated precisely. The transition from atoms to molecules increases the difficulty even more. Because almost all atoms on our planet are bound in molecules, perceiving the structure of molecular binding is essential to understanding the material properties of our environment. Atoms with a single electron in a highly excited state, so-called Rydberg atoms, transfer the simple structure of hydrogen atom to atoms that are more complex because the single excited electron is in far distance from the nucleus and the other electrons. Furthermore, Rydberg atoms gained a lot of attention in the recent years due to their strong interactions, which can be measured even at micron distance and are already used in the field of quantum simulation and quantum computation.

The team around Immanuel Bloch and Christian Groß could now use these interactions in order to bind two Rydberg atoms by using laser light. ”Due to the comparatively simple theory of Rydberg atoms, the spectroscopically resolved vibrational states of the resulting molecules are in quantitative agreement with the theoretically calculated energy levels. Furthermore, the large size allows for a direct microscopic access to the bond length and the orientation of the excited molecule”, says Simon Hollerith, PhD student and first author of the study.

In the experiment, the physicists started with a two dimensional atom array with interatomic distances of 0.53 µm, where every site of the array was initially occupied by exactly one atom. The underlying optical lattice pinning the ground state atoms at the initial position was created by interfering laser beams. Because the associated molecules were repelled from the lattice, molecule excitation leads to two empty lattice sites separated by a bond length, which corresponds to a distance of a lattice diagonal in the case of this work. After an excitation pulse, the remaining atom occupation of the lattice was measured with a high-resolution objective and molecules were identified as correlated empty sites. Using this microscopic detection method, the physicists could additionally show that the orientation of the excited molecules for di?erent molecular resonances was alternating between parallel and perpendicular alignment relative to the polarization of the excitation light. The reason is an interference effect based on the electronic structure as well as the vibrational degree of freedom of the molecule, which also predicted by the theoretical expectation.

For the future, the team at the MPQ plans to use the new molecular resonances for quantum simulation of quantum many body systems. The bound states of two Rydberg atoms can be used to engineer large interaction strengths at the distance of a bond length. The presented work was published in Science on the 17th of May 2019 and funded by ”Deutsche Forschungsgemeinschaft” as well as several EU projects, among them the EU Flagship for Quantum Technologies with the project PASQUANS.