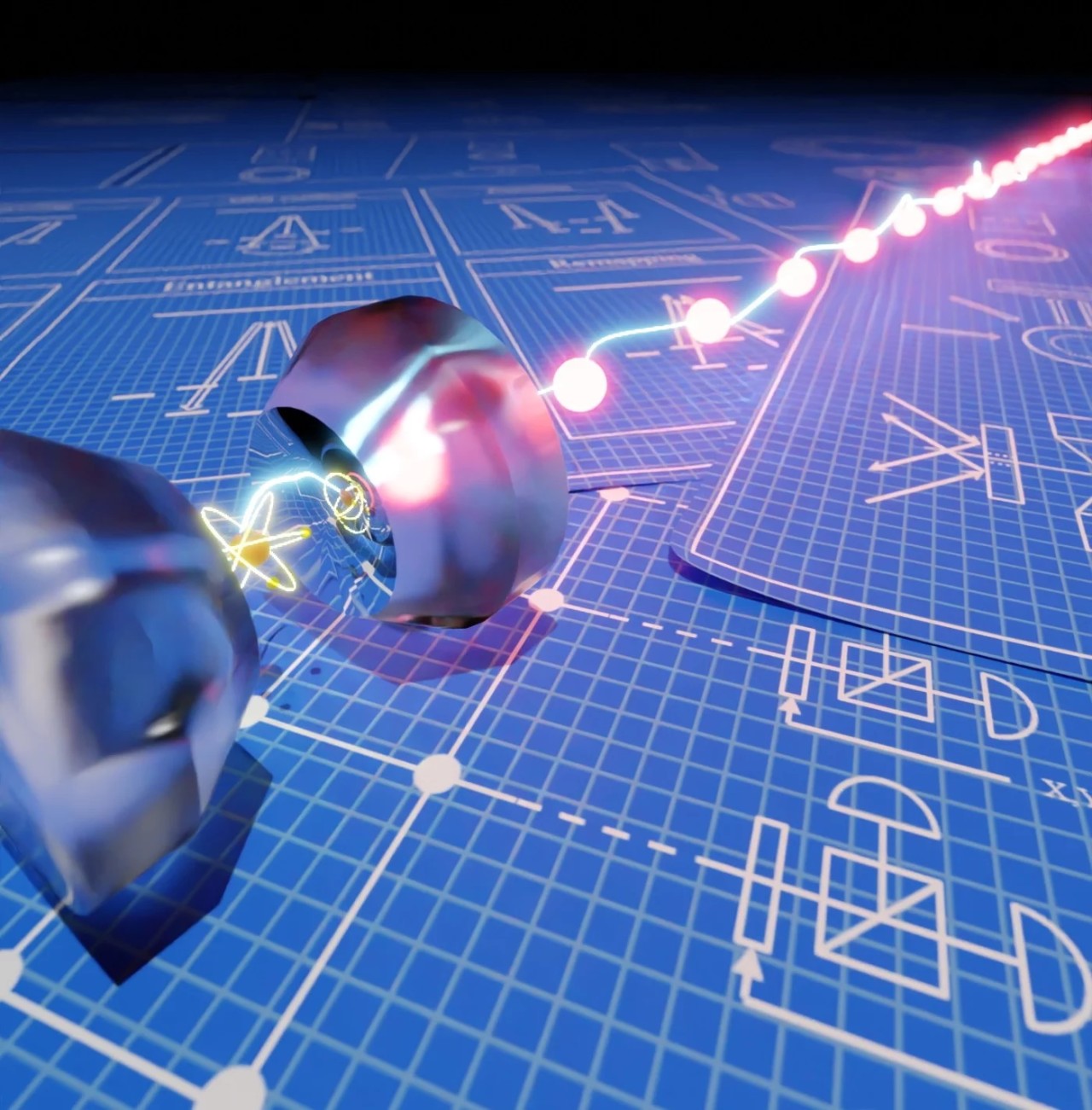 In order to effectively use a quantum computer, a larger number of specially prepared – in technical terms: entangled – basic building blocks are needed to carry out computational operations. A team of physicists at the Max Planck Institute of Quantum Optics in Garching has now for the very first time demonstrated this task with photons emitted by a single atom. Following a novel technique, the researchers generated up to 14 entangled photons in an optical resonator, which can be prepared into specific quantum physical states in a targeted and very efficient manner. The new method could facilitate the construction of powerful and robust quantum computers, and serve the secure transmission of data in the future.

The phenomena of the quantum world, which often seem bizarre from the perspective of the common everyday world, have long since found their way into technology. For example, entanglement: a quantum-physical connection between particles that links them in a strange way over arbitrarily long distances. It can be used, for example, in a quantum computer - a computing machine that, unlike a conventional computer, can perform numerous mathematical operations simultaneously. However, in order to use a quantum computer profitably, a large number of entangled particles must work together. They are the basic elements for calculations, so-called qubits.

"Photons, the particles of light, are particularly well suited for this because they are robust by nature and easy to manipulate," says Philip Thomas, a doctoral student at the Max Planck Institute of Quantum Optics (MPQ) in Garching near Munich. Together with colleagues from the Quantum Dynamics Division led by Prof. Gerhard Rempe, he has now succeeded in taking an important step towards making photons usable for technological applications such as quantum computing: For the first time, the team generated up to 14 entangled photons in a defined way and with high efficiency.

One atom as a photon source

"The trick to this experiment was that we used a single atom to emit the photons and interweave them in a very specific way," says Thomas. To do this, the Max Planck researchers placed a rubidium atom at the center of an optical cavity – a kind of echo chamber for electromagnetic waves. With laser light of a certain frequency, the state of the atom could be precisely addressed. Using an additional control pulse, the researchers also specifically triggered the emission of a photon that is entangled with the quantum state of the atom.

"We repeated this process several times and in a previously determined manner," Thomas reports. In between, the atom was manipulated in a certain way - in technical jargon: rotated. In this way, it was possible to create a chain of up to 14 light particles that were entangled with each other by the atomic rotations and brought into a desired state. "To the best of our knowledge, the 14 interconnected light particles are the largest number of entangled photons that have been generated in the laboratory so far," Thomas emphasises.

But it is not only the quantity of entangled photons that marks a major step towards the development of powerful quantum computers - the way they are generated is also very different from conventional methods. "Because the chain of photons emerged from a single atom, it could be produced in a deterministic way," Thomas explains. This means: in principle, each control pulse actually delivers a photon with the desired properties. Until now, the entanglement of photons usually took place in special, non-linear crystals. The shortcoming: there, the light particles are essentially created randomly and in a way that cannot be controlled. This also limits the number of particles that can be bundled into a collective state.

The method used by the Garching team, on the other hand, allows basically any number of entangled photons to be generated. In addition, the method is particularly efficient - another important measure for possible future technical applications: "By measuring the photon chain produced, we were able to prove an efficiency of almost 50 percent," says Philip Thomas. This means: almost every second "push of a button" on the rubidium atom delivered a usable light particle - far more than has been achieved in previous experiments. "All in all, our work removes a long-standing obstacle on the path to scalable, measurement-based quantum computing," summarises department Director Gerhard Rempe the results.

The scientists at the MPQ want to remove yet another hurdle. Complex computing operations for instance would require at least two atoms as photon sources in the resonator. The quantum physicists speak of a two-dimensional cluster state. "We are already working on tackling this task," reveals Philip Thomas. The Max Planck researcher also emphasises that possible technical applications extend far beyond quantum computing: "Another application example is quantum communication" - the tap-proof transmission of information, for example by light in an optical fibre. There, the light experiences unavoidable losses during its propagation due to optical effects such as scattering and absorption - which limits the distance over which data can be transported. Using the method developed in Garching, quantum information could be packaged in entangled photons and could also survive a certain amount of light loss - and enable secure communication over greater distances.