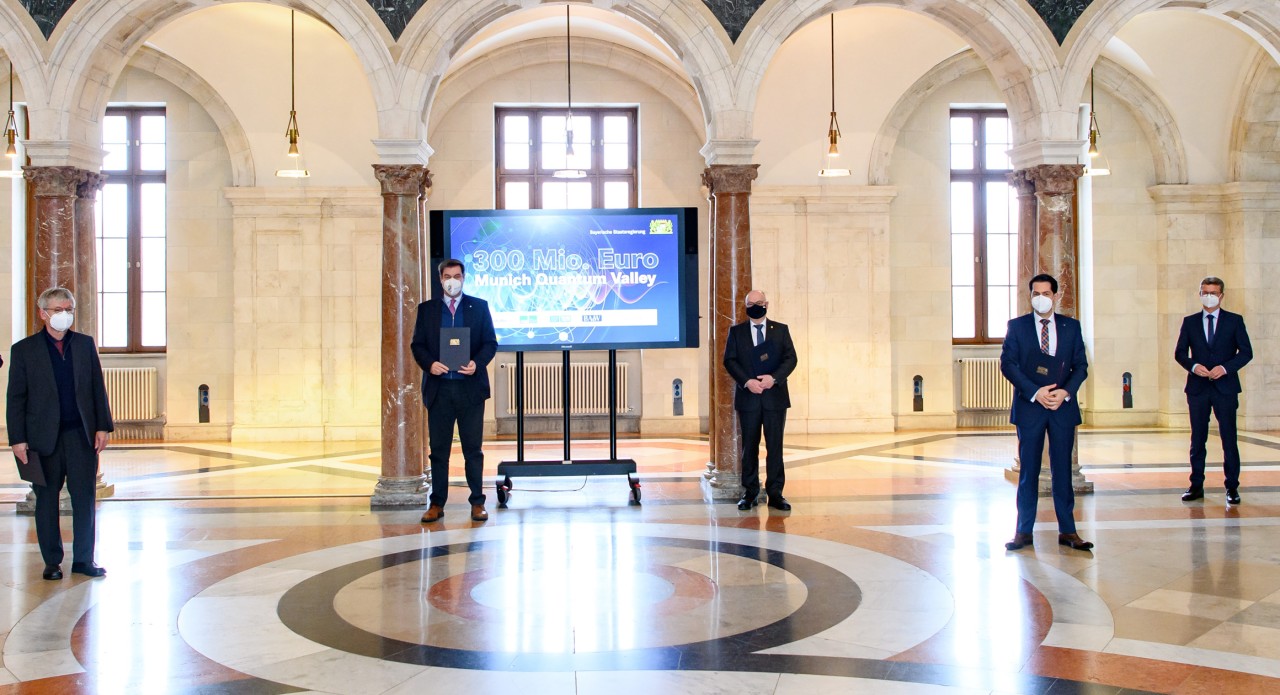 Bavaria's leading scientists and universities kick off a new research initiative to promote quantum science and develop new quantum technologies. The Free State of Bavaria is supporting the project with 300 million euros.

A quantum computer that puts conventional computers in the shade, tap-proof communication methods and fundamental elements of quantum technology - these are some of the goals that scientists will pursue in the future in the Munich Quantum Valley. Bavarian Prime Minister Markus Söder, the Ministers Hubert Aiwanger and Bernd Sibler as well as the Presidents of the Bavarian Academy of Sciences and Humanities Thomas O. Höllmann, the Fraunhofer-Gesellschaft Reimund Neugebauer, the Ludwig-Maximilians-Universität München Bernd Huber, the Max Planck Society Martin Stratmann and the Technical University of Munich Thomas F. Hofmann have given the starting signal for the research initiative with signing a declaration of intent on 11 January 2021 in Munich.

"We very much welcome this initiative," says LMU President Prof. Bernd Huber. "Munich is one of the world's important centers in the field of quantum science, and LMU is one of its driving forces. Our joint cluster of excellence ,Munich Center for Quantum Science and Technology' brings together highly respected researchers at the Munich site. With the new Munich Quantum Valley, quantum sciences will advance even further."

Immanuel Bloch, MCQST co-Speaker and Head of the Department of Quantum Many-Body Systems at the Max Planck Institute of Quantum Optics and LMU München comments on the project's launch: "The Munich Quantum Valley initiative, supported by the Bavarian state government, is an important signal for the continued development of quantum technologies at the research and high-tech location of Munich and throughout Bavaria. The Max Planck Institute of Quantum Optics is a central pillar of this project, which will have a big impact on the institute’s work in the coming years. It opens up new research and development opportunities in collaboration with the industry, Munich's universities and research institutions throughout Bavaria and beyond. We are very pleased about a joint Munich strategy for the promotion and development of quantum technologies and quantum computing in particular."

See the full news on the webpages of our partner institutions (in German):

On January 11th, Immanuel Bloch talks about the background and benefits of the Munich Quantum Initiative in the podcast IQ - Wissenschaft und Forschung by Bayerischer Rundfunk (German only).