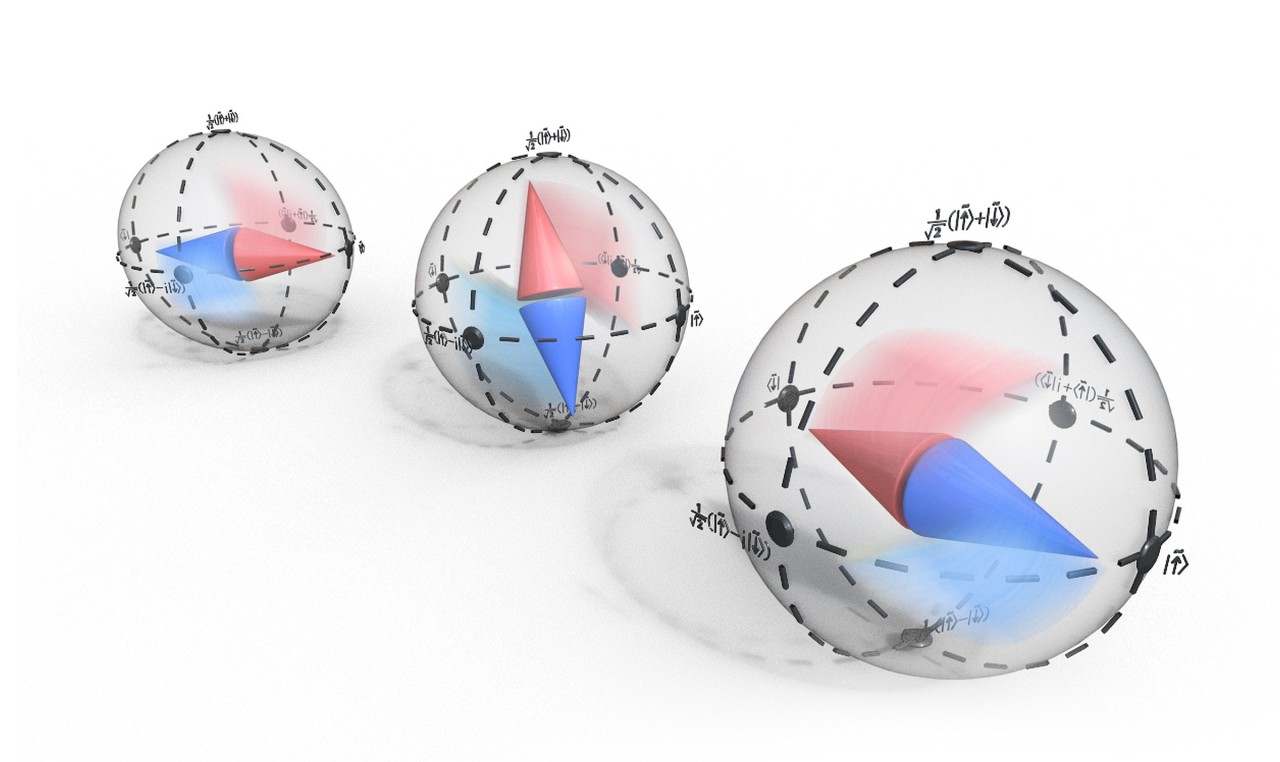 Precession squared: The rise of pseudospin

A team of researchers including MCQST members from the Bavarian Academy of Sciences and Humanities and the Technical University of Munich (TUM), and the Norwegian University of Science and Technology (NTNU) in Trondheim have discovered an exciting method for controlling spin carried by quantized spin wave excitations in antiferromagnetic insulators.

Precession squared: The rise of the pseudospin

Observation of the magnon Hanle effect in antiferromagnetic insulators

Watching ice skaters rotate faster and faster when they draw in their arms is a remarkable demonstration of the physics of angular momentum. This quantity exists also in quantum mechanics. In this framework, the research group has demonstrated full control over angular momentum transport in a magnetically ordered insulator. In the picture of the ice skating, the researchers found the right tune to keep an ensemble of skaters spinning with the same speed and in a synchronized way.

Elementary particles carry an intrinsic angular momentum known as their spin. For an electron, the spin can take only two particular values relative to a quantization axis, letting us denote them as spin-up and spin-down electrons. This intrinsic two-valuedness of the electron spin is at the core of many fascinating effects in physics. In today’s information technology, the spin of an electron and the associated magnetic moment are exploited in applications of information storage and readout of magnetic media, like hard disks and magnetic tapes.

Both, the storage media and the readout sensors utilize ferromagnetically ordered materials, where all magnetic moments align parallel. However, the moments may orient in a more complex way. In antiferromagnets, the “antagonist to a ferromagnet“, neighboring moments align in an anti-parallel fashion. While these systems look “non-magnetic” from outside, they have attracted broad attention as they promise robustness against external magnetic fields and faster control. Thus, they are considered as the new kids on the block for applications in magnetic storage and unconventional computing.

One important question in this context is whether and how information can be transported and detected in antiferromagnets. Researchers at the Bavarian Academy of Sciences and Humanities, the Technical University of Munich (TUM) and the Norwegian University of Science and Technology (NTNU) in Trondheim studied the antiferromagnetic insulator hematite in this respect. In this system, charge carriers are absent and therefore it is a particularly interesting testbed for the investigation of novel applications, where one aims at avoiding dissipation by a finite electrical resistance. The scientists discovered a new effect unique to the transport of antiferromagnetic excitations, which opens up new possibilities for information processing with antiferromagnets.

Unleashing the pseudospin in antiferromagnets

Dr Matthias Althammer, the lead researcher on the project describes the effect as follows: “In the antiferromagnetic phase, neighboring spins are aligned in an anti-parallel fashion. However, there are quantized excitations called magnons. Those carry information encoded in their spin and can propagate in the system. Due to the two antiparallel-coupled spin species in the antiferromagnet the excitation is of a complex nature, however, its properties can be cast in an effective spin, a pseudospin. We could experimentally demonstrate that we can manipulate this pseudospin, and its propagation with a magnetic field.” Dr Akashdeep Kamra, the lead theoretician from NTNU in Trondheim adds that “this mapping of the excitations of an antiferromagnet onto a pseudospin enables an understanding and a powerful approach which has been the crucial foundation for treating transport phenomena in electronic systems. In our case, this enables us to describe the dynamics of the system in a much easier manner, but still maintain a full quantitative description of the system. Most importantly, the experiments provide a proof-of-concept for the pseudospin, a concept which is closely related to fundamental quantum mechanics.”