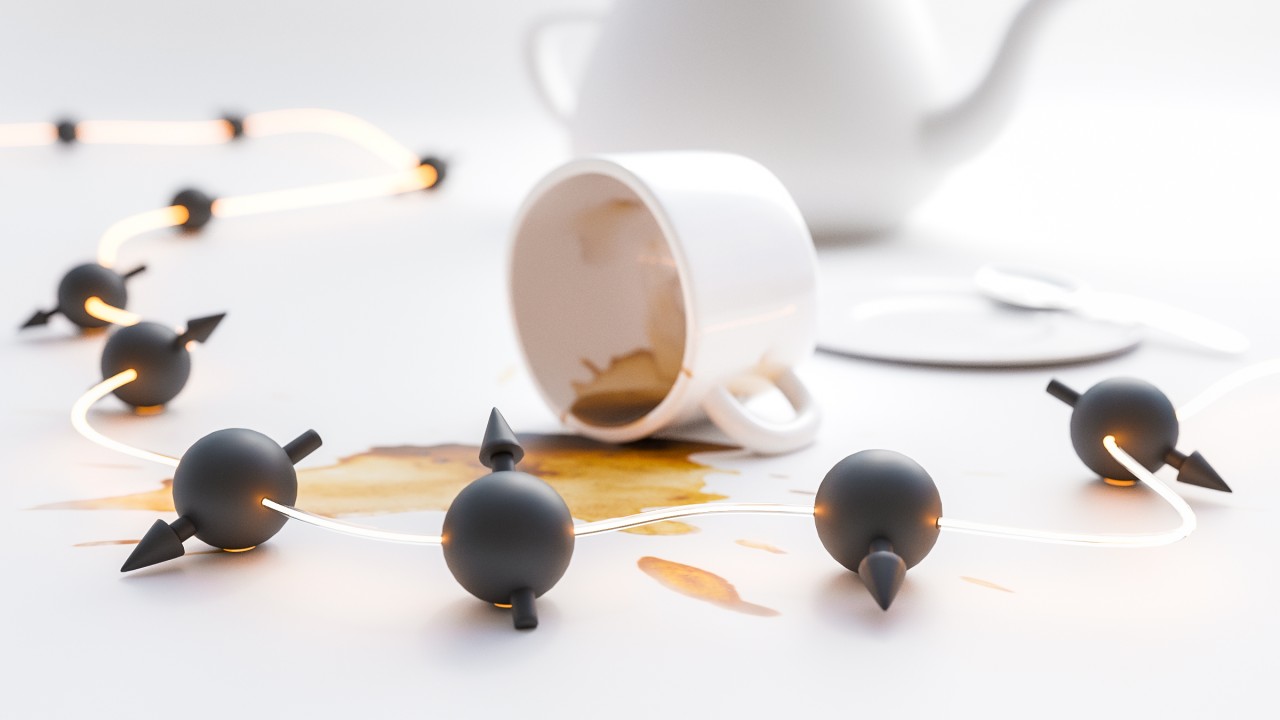 For the first time, researchers have succeeded in observing a new transport phenomenon in spin chains under the microscope - with surprising results: the movement in the quantum world resembles certain phenomena known from everyday life, like the shape of coffee stains on a tablecloth.

The behaviour of microscopic quantum magnets has long been a subject taught in lectures in theoretical physics. However, investigating the dynamics of systems that are far out of equilibrium and watching them “live” has been difficult so far. Now, researchers at the Max Planck Institute of Quantum Optics in Garching have accomplished precisely this, using a quantum gas microscope. With this tool, quantum systems can be manipulated and then imaged with such high resolution that even individual atoms are visible. The results of the experiments on linear chains of spins show: The way their orientation propagates corresponds to the so-called Kardar-Parisi-Zhang superdiffusion. This confirms a conjecture that recently emerged from theoretical considerations.

A team of physicists around Dr. Johannes Zeiher and Prof Immanuel Bloch has eyes on objects that others hardly ever get to see. The researchers at the Max Planck Institute of Quantum Optics (MPQ) in Garching use a so-called quantum gas microscope to track down processes on the tiny scale of quantum physics. Such an instrument allows – with the help of atoms and lasers – to specifically create quantum systems with desired properties and to investigate them with high resolution. In these experiments, the researchers also focus on transport phenomena – how quantum objects move under certain external conditions.

The team has now made a surprising experimental discovery. The researchers were able to show that the one-dimensional transport of spins – the term "spin" stands for a specific, magnetic quantum property of atoms and other particles – resembles macroscopic phenomena in certain areas. For the most part, processes in the quantum realm and in the everyday world differ significantly. "But our work reveals an interesting connection between quantum mechanical spin systems in cold atoms and classical systems such as growing bacterial colonies or spreading wildfires," says Johannes Zeiher, group leader in the Quantum Many-Body Systems division at MPQ. "This discovery is completely unexpected and points to a deep connection in the field of non-equilibrium physics that is still poorly understood."

Physicists refer to such a theoretical analogy between random motion in quantum and classical systems as “universality”. In this specific case, it is the Kardar-Parisi-Zhang universality (KPZ) - a phenomenon previously known only from classical physics.

In order to observe the phenomenon microscopically, the Garching team first cooled down a cloud of atoms to temperatures close to absolute zero. That way, movements due to heat could be ruled out. Then they locked the ultracold atoms in a specially formed "box-shaped" potential, formed by an arrangement of tiny mirrors. "We used this to study the relaxation of a single magnetic domain wall in a chain of 50 linearly arranged spins," explains David Wei, a researcher in Johannes Zeiher's group. The domain wall separates areas with identical orientation of neighbouring spins from each other. The researchers first created the domain wall for the experiment using a new trick, whereby an "effective magnetic field" was generated by projecting light. In doing so, the researchers can strongly suppress the couplings between spins, effectively "locking" them into place.

The relaxation within the spin chain occurred after the couplings between spins were switched on in a controlled manner and, as it turned out, followed a characteristic pattern. "This can be described mathematically by a power law with the exponent 3/2," says Wei - a hint at the connection with KPZ universality. Further evidence for this relationship was provided when the researchers detected the motion of individual spins, which was revealed through the quantum gas microscope.

"This high precision was the basis for a detailed statistical evaluation," says Zeiher. "The striking course of spin diffusion that our experiment showed corresponds in its mathematical form approximately to the spread of a coffee stain on a tablecloth, for example," explains the Max Planck physicist. That such an astonishing connection could exist had been suspected by a team of theorists about two years ago on the basis of theoretical considerations. However, experimental confirmation of this hypothesis was still lacking.

For the description of quantum mechanical spin phenomena, physicists have been using the so-called Heisenberg model very successfully for a long time (but it was only recently that spin transport phenomena could be described theoretically within this model). "Our results show that surprising new insights are still possible even within an established theoretical framework," Johannes Zeiher emphasises. "And they are proof of how theory and experiment cross-fertilise in physics."

The results that have now been achieved by the team in Garching are not only of academic value. They could also be useful for tangible technical applications. For example, spins also constitute the basis of certain forms of quantum computers. Knowledge of the transport properties of the information carriers could be of critical importance for the practical realisation of such novel computer architectures.