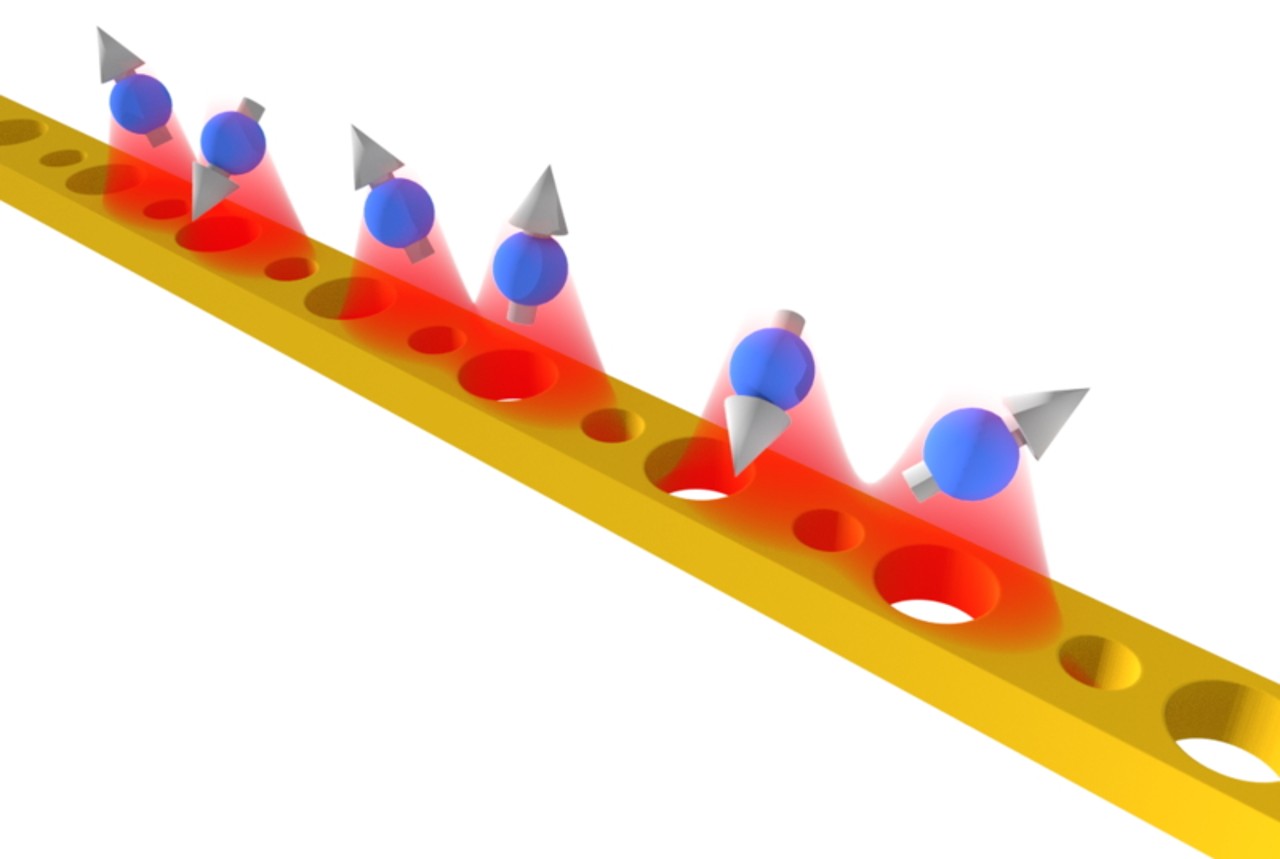 Physicists from the Max Planck Institute of Quantum Optics and Consejo Superior de Investigaciones Científicas (CSIC) developed a new principle for quantum simulators in which quantum bits can exchange light quanta via a waveguide.

Intensive research is being carried out on quantum simulators: they promise to precisely calculate the properties of complex quantum systems, when conventional and even supercomputers fail. In a cooperative project, theorists from the the Max Planck Institute of Quantum Optics in Garching anf the Consejo Superior de Investigaciones Científicas (CSIC) have now developed a new toolbox for quantum simulators and published it in Science Advances. It uses the nobel prize-winning principle of topology to allow quantum bits, for example individual atoms, to communicate with each other via "topological radio channels". The "radio channels" are provided by a light field that travels in waveguide in a robust manner with the help of topology. The concept offers room for completely new ideas, ranging from basic research to quantum information.

"How can we make two distant quantum bits 'talk' to each other?" asks Alejandro González-Tudela and states: "This is an essential challenge in the field of quantum information and simulation!” Until recently, the theoretical physicist was a postdoctoral fellow in the department of Ignacio Cirac, director at the Max Planck Institute of Quantum Optics in Garching, and today he is a permanent researcher at the Instituto de Física Fundamental IFF-CSIC in Madrid. Together with Cirac and two Spanish colleagues from the Instituto de Ciencias de Materiales de Madrid, he has now published a scientific paper that introduces a completely new toolbox to photonics. Photonics is a branch of physics that deals with the interaction between light and matter and its technical application.

One possible application is the so-called quantum simulation, which goes back to an idea of the famous US Nobel Prize winner Richard Feynman. If one wants to calculate the behaviour of a quantum system as accurately as possible on a conventional computer, the necessary computing power doubles with each new quantum particle in the system. Because of this mathematical avalanche, even relatively small quantum systems consisting of just a few dozen particles overrun the performance of even conventional supercomputers. For this reason, Feynman had the idea decades ago to simulate the behaviour of a quantum system with the help of another quantum system. In principle, such a quantum simulator is a specialized quantum computer whose individual quantum bits can be easily controlled from the outside - in contrast to the rather inaccessible quantum system whose behaviour it is supposed to simulate.

Such quantum simulators have been the subject of intensive research for many years. For example, they promise to provide a better understanding of material properties such as superconductivity or complex magnetism. They also play an important role at the Institute in Garching. For example, a simulator can consist of a cloud of ultracold atoms trapped in a spatial lattice of laser light. If these quantum bits - or qubits for short - are to interact with each other, they do so by exchanging light quanta, photons. However, an atom normally emits such a photon in some random direction. It would be much more efficient for quantum simulations if the qubit could target its photon directly to its next or next but one neighbour.

González-Tudela and his team have now developed a theoretical principle that enables such a targeted "photon radio" between atoms. "We have to pack the qubits and photons into a waveguide," explains the theorist. However, how do you "wire" an ensemble of atoms floating in a light grid in space with such waveguides and make them talk in a robust way? The answer of the four theorists is: with extremely tricky light.

The trick is essentially to transfer the mathematical concept of topology from solid state physics to photonics. In solid state physics, it has triggered a real hype in recent years because it can produce completely new, previously unknown material properties. In 2016, the three British physicists David Thouless, Duncan Haldane and Michael Kosterlitz were awarded the Nobel Prize in Physics for successfully introducing topological concepts to solid state physics. In principle, the question is how many holes a geometric body has. A coffee cup, for example, has a hole in its handle just like a doughnut ring in its center, and both have thus the topological number one. The consequence: from a purely geometric point of view, the cup and donut can easily be transformed into each other. On the other hand, violent topological resistance is encountered when a one-hole donut is to be transformed into a three-hole pretzel.

In physics, this hole number rule has the consequence that the topology can enormously stabilize certain physical properties against disturbances. And this leads to the second major challenge in quantum information and thus quantum simulation: ubiquitous disturbances cause the highly sensitive quantum information to decay rapidly.

"This so-called decoherence is the biggest problem of quantum information," says González-Tudela. The captivating properties of topology soon led clever minds to the conclusion that the sensitive quantum bits could be packaged in physical systems with such topological properties. This is being researched in solid state physics, for example, and large companies such as Microsoft are also investing heavily in this research.

González-Tudela and his three co-authors have now devised a toolbox with which such topological concepts can be transferred into photonics. Some systems, such as ultracold atoms in light grids, are already very advanced in their controllability. They therefore offer many possibilities for quantum simulation. The toolbox of the four theorists opens a new space for many creative ideas. Simply put, it consists of a set of quantum bits, for example single atoms arranged in a line. They can interact with a cleverly constructed, linear "light bath" that behaves like the waveguide the theoretical physicists were looking for.

If one now manipulates the various adjusting screws of the system, the quantum bits can exchange photons as desired via this waveguide. But not only that: For example, a qubit can send its information in one direction, but remain completely dark in the opposite direction. Such interactions are extremely difficult to be produced in the micro world of atoms.

Thus the toolbox of the four theorists offers many new possibilities to let quantum bits communicate with each other. This is exactly what future quantum simulators need. The concept is also universal: it can also be realized in some quantum systems composed by many qubits that are currently being researched. The new work of the four theorists could become the nucleus for completely new ideas, ranging from pure basic research to quantum information.