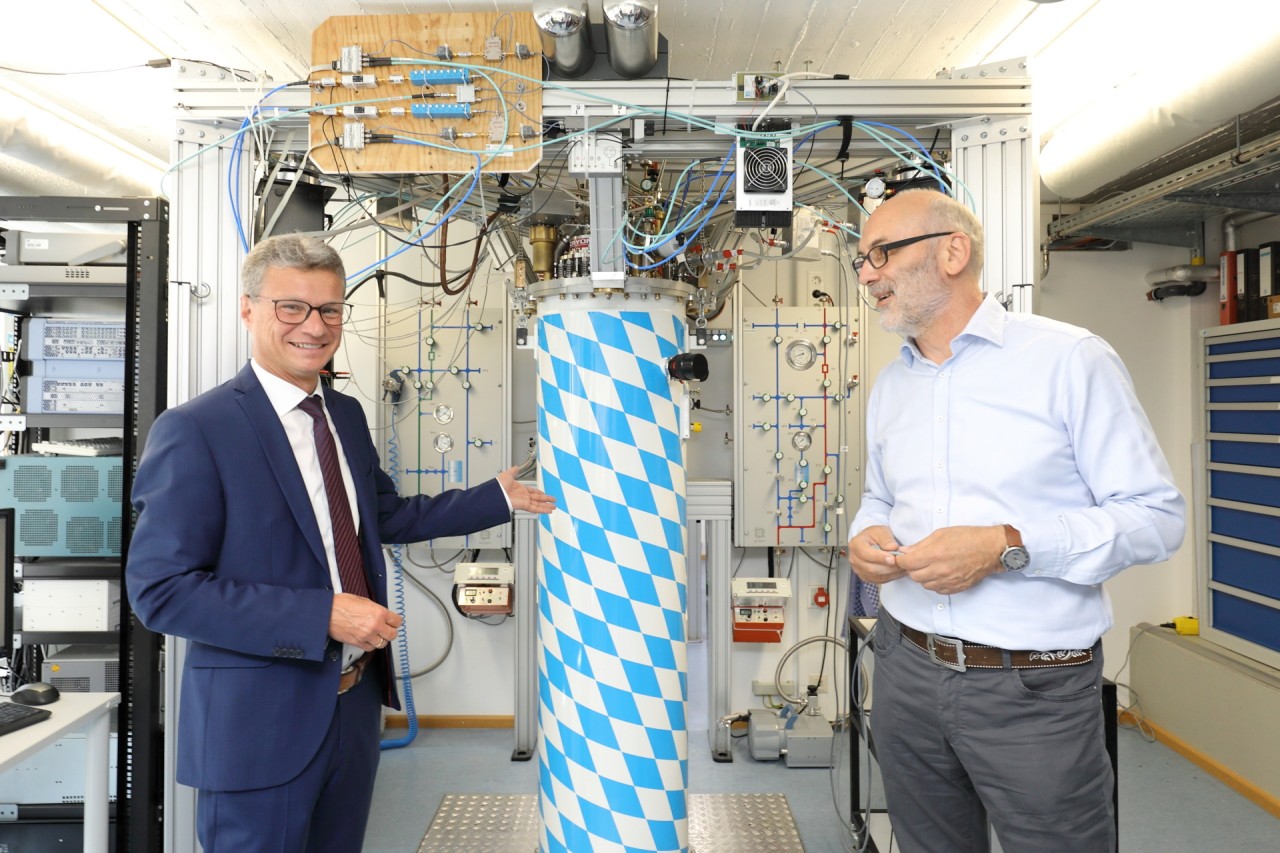 Bavarian State Minister of Science and Arts, Bernd Sibler, visits the Walther-Meißner-Institute for Low Temperature Research (WMI) of the Bavarian Academy of Sciences and Humanities on the Garching Research Campus to get informed on its cutting-edge research on quantum systems, in particular on the development of quantum technologies required for the realization of quantum computers.

Quantum computers based on superconducting circuits are operated at low temperatures, a research field in which the WMI is performing pioneering work since decades. In particular, WMI develops novel methods for the generation of temperatures close to absolute zero, advanced thin film technology for superconducting and magnetic materials, and recipes for the realization of superconducting and magnetic nanodevices.
During a lab tour, the scientific directors of WMI, Rudolf Gross and Stefan Filipp, inform State Minister Sibler on the current research efforts in the design, fabrication, and characterization of superconducting quantum circuits, strengthening the role of the WMI in the ongoing efforts in the field of quantum science and technology as well as in quantum computing.

„The Walther-Meißner-Institute is one of the internationally visible lighthouses in the Bavarian research landscape!“ State Minister Sibler points out during his visit. „I am very pleased that progress and innovation in the field of quantum science and technology are strategically planned and implemented at WMI since almost two decades. The state-of-the-art basic research but also the development of core technologies at WMI are path-breaking and will be the basis for future efforts in building useful quantum computers”, he adds.

“The continuous support by the State Ministry of Science and Arts together with the long-term research strategy of WMI is the key to our success”, the two directors of WMI let Minister Sibler know. Both are professors at the Technical University of Munich and Principle Investigators of the Munich Center of Quantum Science and Technology (MCQST). “As one of the spokespersons of MCQST, I am particularly happy that we can show the new extra-large low temperature machine, which has been partly funded by MCQST and will host a future Bavarian quantum computer”, adds Rudolf Gross. Stefan Filipp confirms that “this new machine will boost the WMI activities and will allow us to take a leading position within Europe”.