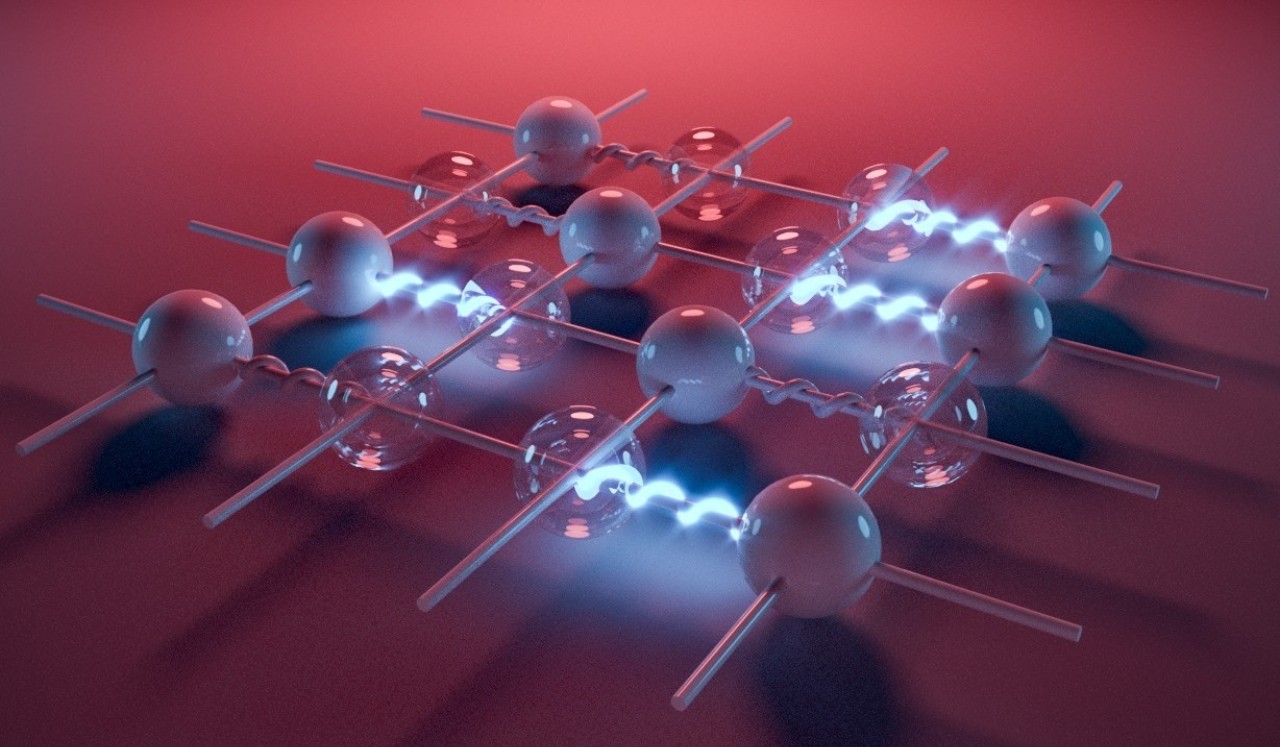 Fundamental interactions between particles are mediated by gauge bosons. Generally, these are described by gauge theories which are extremely challenging to treat theoretically in a wide range of parameters. Tackling some of these open questions in table-top experiments with specifically-designed quantum simulators constitutes an outstanding goal. Now, scientists at LMU and the Max Planck Institute of Quantum Optics together with collaborators from the Technical University Munich, Harvard University and the Université Libre de Bruxelles succeeded in demonstrating the main ingredients of a specific lattice gauge theory with two-component ultracold bosons in optical superlattices. The study appears in the scientific magazine Nature Physics and was highlighted with a News and Views article.

How do elementary constituents of matter interact with each other?

One of the great challenges in modern physical sciences concerns the identification of elementary constituents of matter, and the manner by which these particles interact with each other. This fundamental problem occurs in many areas of physics including high-energy, condensed matter and quantum computation. While there have been remarkable achievements, confirming the existence of a plethora of elementary particles and novel exotic phases of matter, many fundamental questions remain unanswered due to the great complexity of the problem. One of the most prominent examples in this regard is the still incomplete knowledge of the phase diagram of Quantum Chromodynamics, which describes the strong interaction between quarks and gluons.

Due to the vast progress in controlling individual particles including ions, photons and atoms, it has been suggested that quantum simulations could offer new insights on open questions related to the fundamental interactions between (quasi-)particles, which are mediated by gauge fields. Originally the concept of quantum simulation was proposed by Nobel-prize winner Richard Feynman. The key idea is to engineer a quantum many-body system that is tailored to emulate the properties of a given theoretical model, hence, offering a clear view on fundamental physical phenomena of interest in a controlled laboratory environment. Engineered quantum systems made of ultracold atoms in optical lattices emerged as versatile platforms to study the properties of exotic quantum phases of matter.

Simulating gauge fields, however, is extremely demanding, since it requires the precise implementation of matter particles and gauge fields, which interact in a way that has to respect the local symmetry of the gauge theory of interest.

A team of physicists at LMU Munich and the Max Planck Institute of Quantum Optics (MPQ), led by Professor Monika Aidelsburger and Professor Immanuel Bloch , carefully designed and successfully realized the fundamental ingredients of a specific minimal lattice gauge theory - a Z2 lattice gauge theory, which plays an important role in condensed matter physics and quantum computation. The team realized a controllable quantum simulator of ultracold bosonic particles trapped in a bichromatic optical lattice. Isolating the dynamics of two particles in a double well facilitated the controlled investigation of the basic building block of the theory, which in future experiments could be used to build extended models. The complex interactions between the particles were manipulated using laser beams, whose intensity was modulated periodically in time. The challenge consisted in implementing well-defined local interactions between "matter" particles and "gauge bosons", the mediators of fundamental interactions. The experimentalists used two different electronic states of the atoms to emulate the different types of particles and the local interactions have been realized by addressing the atoms in a state-dependent manner. The team validated a novel approach based on periodic driving by observing the dynamics of the atoms state- and site-resolved. The excellent knowledge of the microscopic parameters of the model further allowed them to outline the path for future experiments in extended geometries and in higher dimensions.

Christian Schweizer, the lead author of this study concludes: "While it is still a long path to advance existing experimental platforms in a way that will enable us to shed new light onto fundamental open questions regarding the phase diagram of Quantum Chromodynamics, these are exciting times for quantum simulators, which develop at a remarkable rate.” The authors have taken the first steps in the long journey towards studying high-energy physics problems with table-top experiments. This study provides a novel route for solving the outstanding challenges that experimentalists face with currently available protocols to simulate the fundamental interactions between elementary constituents of nature.