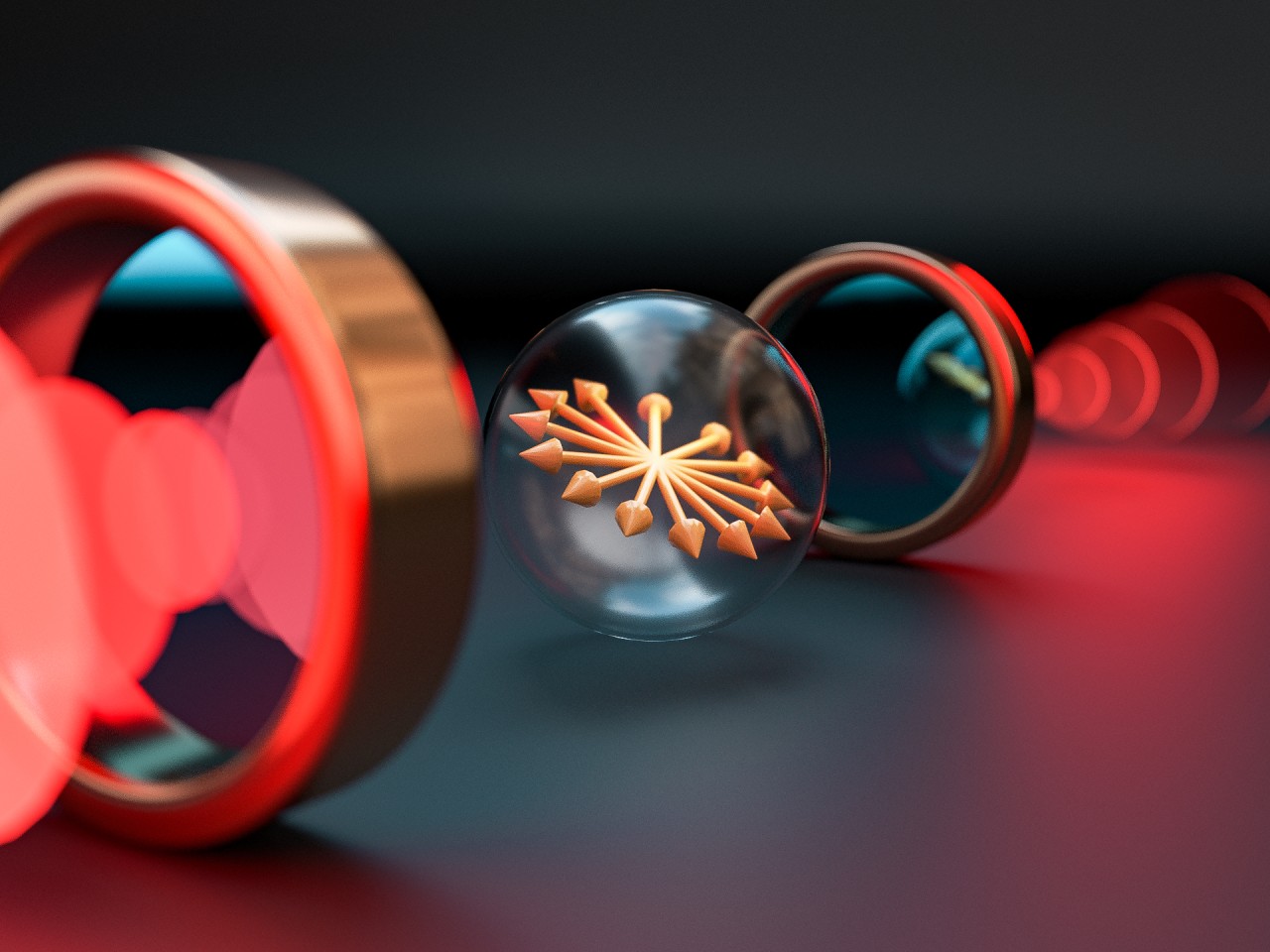 The Return of the Spin Echo

The Return of the Spin Echo

A team of researchers from the Technical University of Munich (TUM), TU Wien (Vienna University of Technology) and the Bavarian Academy of Sciences and Humanities have discovered a remarkable echo effect – this effect presents exciting, new opportunities for working with quantum information.

Small particles can have an angular momentum that points in a certain direction – this is known as spin. This spin can be manipulated using a magnetic field. This principle, for example, is the basic idea behind magnetic resonance imaging as used in hospitals. An international research team has now discovered a surprising effect in a system that is particularly well suited for processing quantum information: the spins of phosphorus atoms in a piece of silicon, coupled to a microwave resonator. If these spins are expertly stimulated with microwave pulses, a so-called spin echo signal can be detected after a certain time – the injected pulse signal is re-emitted as a quantum echo.

Amazingly, this quantum echo doesn’t occur only once, but a whole series of echoes can be detected. This opens up new possibilities of how information can be processed with quantum systems.

The echo of quantum spins

"Spin echoes have been known for a long time, this is nothing unusual", says Prof. Stefan Rotter from TU Wien (Vienna). First, a magnetic field is used to make sure that the spins of many atoms point in the same magnetic direction. Then the atoms are irradiated with an electromagnetic pulse, and suddenly their spins begin to change direction. However, the atoms are embedded in slightly different environments. Thus they are affected by slightly different forces.

"As a result, the spin does not change at the same speed for all atoms," explains Dr. Hans Hübl, Deputy Director of the Walther-Meißner-Institute (WMI) at the Bavarian Academy of Sciences and Humanities and member of the Munich Center for Quantum Science and Technology (MCQST). "Some particles change their spin direction faster than others, and soon you have a wild jumble of spins with completely different orientations.”

But it is possible to rewind this apparent chaos – with the help of another electromagnetic pulse. A suitable pulse can actually restore the previous spin rotation, so that all spins fall back in sync once again.

"You can imagine it's a bit like running a marathon," says Stefan Rotter. "At the start signal, all the runners are still together. As some runners are faster than others, the field of runners is pulled further and further apart over time. However, if all runners were now given the signal to return to the start, all runners would return to the start at about the same time, although faster runners have to cover a longer distance back than slower ones.”

In the case of spins, this means that at a certain point in time all particles have exactly the same spin direction again - and this is called the "spin echo". "Based on our experience in this field, we had already expected to be able to measure a spin echo in our experiments," says Hans Hübl. "The remarkable thing is that we were not only able to measure a single echo, but a series of several echoes.”

The spin that influences itself

At first it was unclear how this new effect had come about, but more detailed theoretical analyses made it possible to understand the phenomenon: it was down to the strong link between the two elements involved in the experiment – the spins and the photons in the microwave resonator, an electric circuit in which microwaves can only exist with certain wave lengths. "This coupling is the essence of our experiment: You can store information in the spins, and with the help of the microwave photons in the resonator you can modify it or read it out," says Hans Hübl.

The strong coupling between the atomic spins and the microwave resonator is also responsible for the multiple echoes: an electromagnetic signal is created when the atom spins have all returned to the same direction at the first echo.

"Thanks to the coupling to the microwave resonator, this signal acts back on the spins, and this leads to another echo, and on and on," explains Stefan Rotter. "The spins themselves cause the electromagnetic pulse, which is responsible for the next echo.”

The physics behind spin echoes are of great importance for technical applications - they constitute a fundamental principle that forms the basis of magnetic resonance imaging, for example. It is now necessary to conduct more thorough investigations into the new opportunities presented by the recently discovered multiple echo, for the processing of quantum information, for example. "For sure, multiple echoes in spin ensembles coupled strongly to the photons of a resonator are an exciting new tool. It will not only find useful applications in quantum information technology, but also in spin-based spectroscopy methods", says co-author Rudolf Gross, director of the Walther-Meißner-Institute, TU Munich Professor and co-speaker for MCQST.