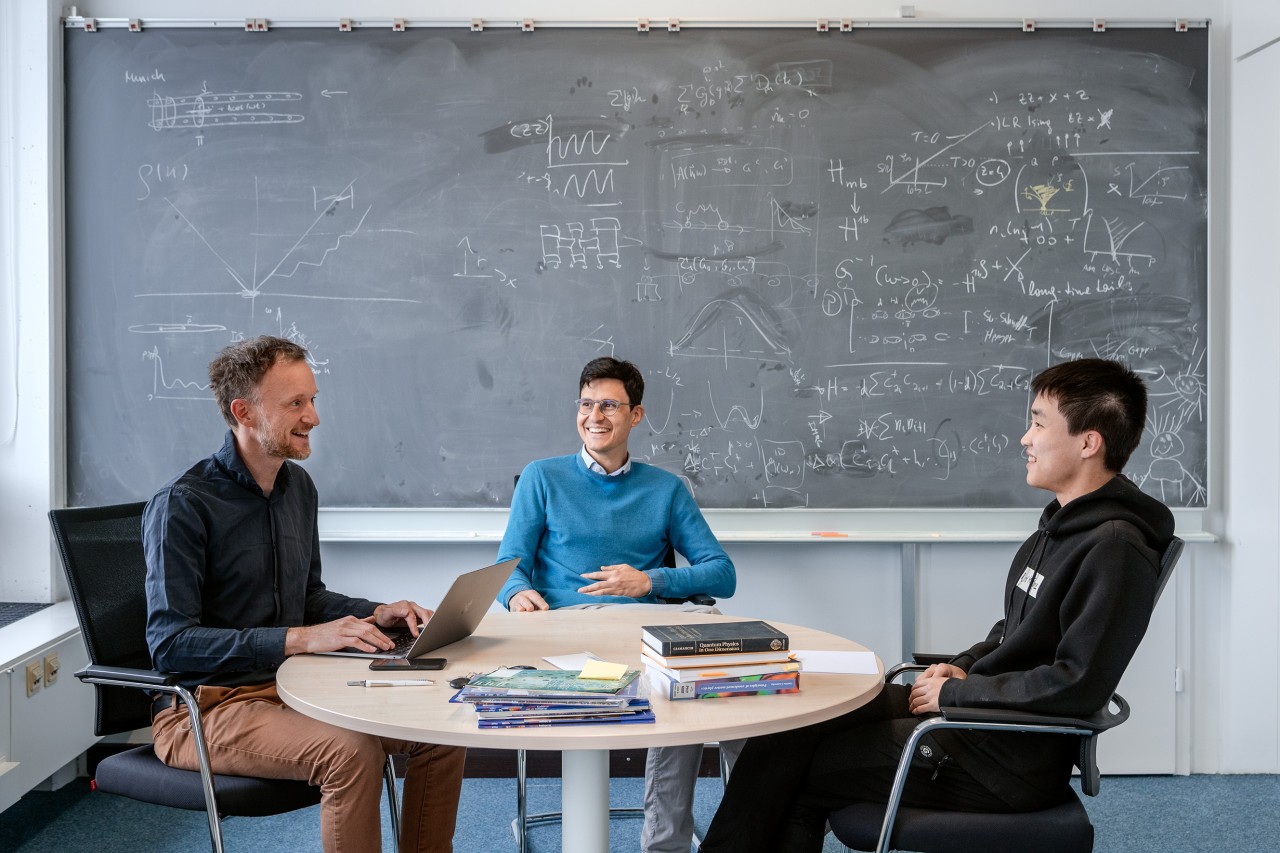 While the number of qubits and the stability of quantum states are still limiting current quantum computing devices, there are questions where these processors are already able to leverage their enormous computing power. In collaboration with the Google Quantum AI team scientists from the Technical University of Munich (TUM) and the University of Nottingham used a quantum processor to simulate the ground state of a so-called toric code Hamiltonian – an archetypical model system in modern condensed matter physics, which was originally proposed in the context of quantum error correction.

What would it be like if we lived in a flat two-dimensional world? Physicists predict that quantum mechanics would be even stranger in that case resulting in exotic particles — so-called “anyons”— that cannot exist in the three-dimensional world we live in. This unfamiliar world is not just a curiosity but may be key to unlocking quantum materials and technologies of the future.

In collaboration with the Google Quantum AI team scientists from the Technical University of Munich and the University of Nottingham used a highly controllable quantum processor to simulate such states of quantum matter. Their results appear in the current issue of the renowned scientific journal "Science".

All particles in our universe come in two flavors, bosons or fermions. In the three-dimensional world we live in, this observation stands firm. However, it was theoretically predicted almost 50 years ago that other types of particles, dubbed anyons, could exist when matter is confined to two dimensions.

While these anyons do not appear as elementary particles in our universe, it turns out that anyonic particles can emerge as collective excitations in so-called topological phases of matter, for which the Nobel prize was awarded in 2016.

“Twisting pairs of these anyons by moving them around one another in the simulation unveils their exotic properties—physicists call it braiding statistics,” says Dr. Adam Smith from the University of Nottingham.

A simple picture for these collective excitations is "the wave" in a stadium crowd – it has a well-defined position, but it cannot exist without the thousands of people that make up the crowd. However, realizing and simulating such topologically ordered states experimentally has proven to be extremely challenging.

Quantum processors as a platform for controlled quantum simulations

In landmark experiments, the teams from TUM, Google Quantum AI, and the University of Nottingham programmed Google’s quantum processor to simulate these two-dimensional states of quantum matter. “Google’s quantum processor named ‘Sycamore’ can be precisely controlled and is a well-isolated quantum system, which are key requirements for performing quantum computations,” says Kevin Satzinger, a scientist from the Google team.

The researchers came up with a quantum algorithm to realize a state with topological order, which was confirmed by simulating the creation of anyon excitations and twisting them around one another. Fingerprints from long-range quantum entanglement could be confirmed in their study. As a possible application, such topologically ordered states can be used to improve quantum computers by realizing new ways of error correction. First steps toward this goal have already been achieved in their work.

“Near term quantum processors will represent an ideal platform to explore the physics of exotic quantum phases matter,” says Prof. Frank Pollmann from TUM. “In the near future, quantum processors promise to solve problems that are beyond the reach of current classical supercomputers.”

Measured parity values for a 31-qubit lattice in the toric code ground state. The qubits (“×”) are placed on a square lattice. The parity expectation values of the star- and plaquettes operators are shown as blue and purple tiles, respectively. The average value of 0.92 ± 0.06 on all tiles shows that the simulation comes very close to the ground state with an exact parity of 1.0. Image: Google Quantum AI

The research was funded by the European Research Council (ERC) under the European Union’s Horizon 2020 research and innovation program, the German Research Foundation (DFG) in the framework of the Cluster of Excellence Munich Center for Quantum Science and Technology (MCQST), funded under Germany’s Excellence Strategy, as well as the Transregional Collaborative Research Center TRR 80, the Max Planck Society (MPG) through the International Max Planck Research School for Quantum Science and Technology (IMPRS-QST), and the Institute for Advanced Study of the Technical University of Munich. Further funding came from the Royal Commission for the Exhibition of 1851, the Walter Burke Institute for Theoretical Physics at Caltech, and by the IQIM, an NSF Frontier center funded by the Gordon and Betty Moore Foundation, the Packard Foundation, and the Simons Foundation. The TUM authors, Prof. Frank Pollmann and Prof. Michael Knap, are members of the Munich Quantum Valley initiative and the Cluster of Excellence "Munich Center for Quantum Science and Technology".