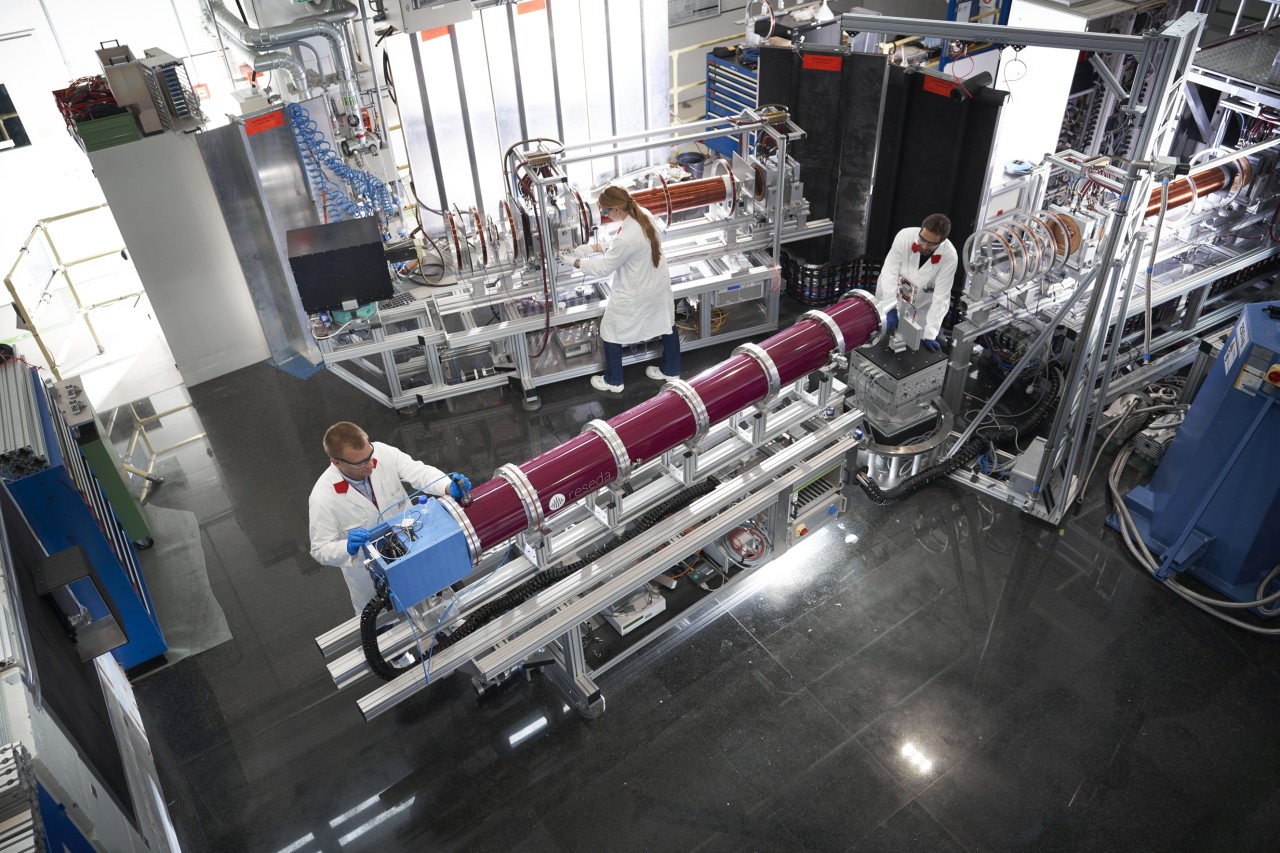 Just as electrons flow through an electrical conductor, magnetic excitations can travel through certain materials. Such excitations, known in physics as "magnons" in analogy to the electron, could transport information much more easily than electrical conductors. An international research team has now made an important discovery on the road to such components, which could be highly energy-efficient and considerably smaller.

An energy-efficient alternative may be the use of spin waves to transport and process information, because they do not produce nearly as much waste heat. Such components could also be much more compact. Scientists around the world are thus looking for materials in which magnetic spin waves can be used to transport information.

An international research consortium with significant participation of the Technical University of Munich (TUM) has now taken an important step forward in this search. Their observations of spin waves on circular paths in certain magnetic materials could also represent a breakthrough for quantum technologies that use waves to transport information.

Propagation of magnetic waves in materials

When you throw a stone into water, you bring the water molecules out of their equilibrium position. They start to oscillate, and a circular wave spreads out. In a very similar way, the magnetic moments in some materials can be made to oscillate. In this process, the magnetic moment performs a gyroscopic motion with respect to its rest position. The precession of one moment affects the vibration of its neighbor, and so the wave propagates.

For applications utilizing these magnetic waves, controlling properties such as wavelength or direction is important. In conventional ferromagnets – in which the magnetic moments all point in the same direction – magnetic waves generally propagate in a straight line.

The propagation of such waves is quite different in a new class of magnetic materials, which, like a box of uncooked spaghetti, consist of a tight arrangement of magnetic vortex tubes. This magnetic order was discovered nearly fifteen years ago by a team led by Christian Pfleiderer and Peter Böni at the Technical University of Munich using neutron experiments.

Because of their non-trivial topological properties and in recognition of the theoretical-mathematical developments of the British nuclear physicist Tony Skyrme, these vortex tubes are known as skyrmions.

Propagation of magnetic waves on a circular path

Since neutrons carry a magnetic moment, they are particularly well suited for the study of magnetic materials. Like a compass needle, they respond sensitively to magnetic fields. Neutron scattering proved to be the only technique capable of detecting spin waves on circular orbits since it provides the requisite resolution over very large length and time scales.

Using polarized neutron scattering, Tobias Weber and his team from the Institut Laue Langevin (ILL) in Grenoble, France have now proven that the propagation of magnetic waves perpendicular to such skyrmions does not occur in a straight line, but rather on a circular path.

"But there is even more to it," says Markus Garst of the Karlsruhe Institute of Technology (KIT), who had developed the theoretical description of spin waves in skyrmions and their coupling to neutrons some time ago. "There is a close analogy between the circular propagation of spin waves perpendicular to a skyrmion lattice and the motion of an electron perpendicular to a magnetic field caused by the Lorentz force."

At very low temperatures, when the circular orbits are closed, their energy is quantized. Predicted almost a hundred years ago by Russian physicist Lev Landau, well-known for electrons this phenomenon is called Landau quantization. In analogy, the influence of the vortex-like character of the skyrmions on the spin waves can be elegantly interpreted as a fictitious magnetic field. In other words, the very complicated interplay of the spin waves with the skyrmion structure is actually very simple and can be described just like the motion of electrons transverse to a real magnetic field.

Moreover, the propagation of spin waves perpendicular to skyrmions also displays a quantization of the circular orbits. The characteristic energy of the spin wave is thus also quantized, which opens the door to completely new applications. In addition, the circular orbit carries a subtle twist, somewhat similar to a so-called Möbius strip. It is topologically non-trivial: The twist can only be removed by cutting and reconnecting the strip. All of this leads to a particularly stable spin wave motion.

"The experimental determination of spin waves in skyrmion lattices required both a combination of world-leading neutron spectrometers and a massive advancement of the software to interpret the data," explains TUM physicist Peter Böni.

The research team employed instruments of the Institut Laue-Langevin in France, the spallation source SINQ at the Swiss Paul Scherrer Institute, the UK’s ISIS neutron and muon source, and the Research Neutron Source Heim Maier-Leibnitz (FRM II) at the Technical University of Munich. Further work on theory and data analysis was carried out at the U.S. Los Alamos National Laboratory and the Karlsruhe Institute of Technology.

Marc Janoschek, who now works at the Paul Scherrer Institute, emphasizes: "It is simply great to see that, after countless experiments at world-leading spectrometers and the clarification of major experimental and theoretical challenges during my time at Los Alamos, the microscopic detection of Landau quantization at the world's unique beamline RESEDA at TUM's FRM II in Garching closes a circle that began almost fifteen years ago with my first measurements at the Heinz Maier-Leibnitz Zentrum in Garching."

However, the motion of spin waves on circular orbits, which are quantized to boot, is a breakthrough not only from the perspective of fundamental research. Christian Pfleiderer, managing director of the newly founded Center for QuantumEngineering at TUM, emphasizes: "The spontaneous motion of spin waves on circular orbits, whose radius and direction arise from the vortex-like structure of skyrmions, opens up a new perspective for realizing functional devices for information processing in quantum technologies, such as simple couplers between qubits in quantum computers."