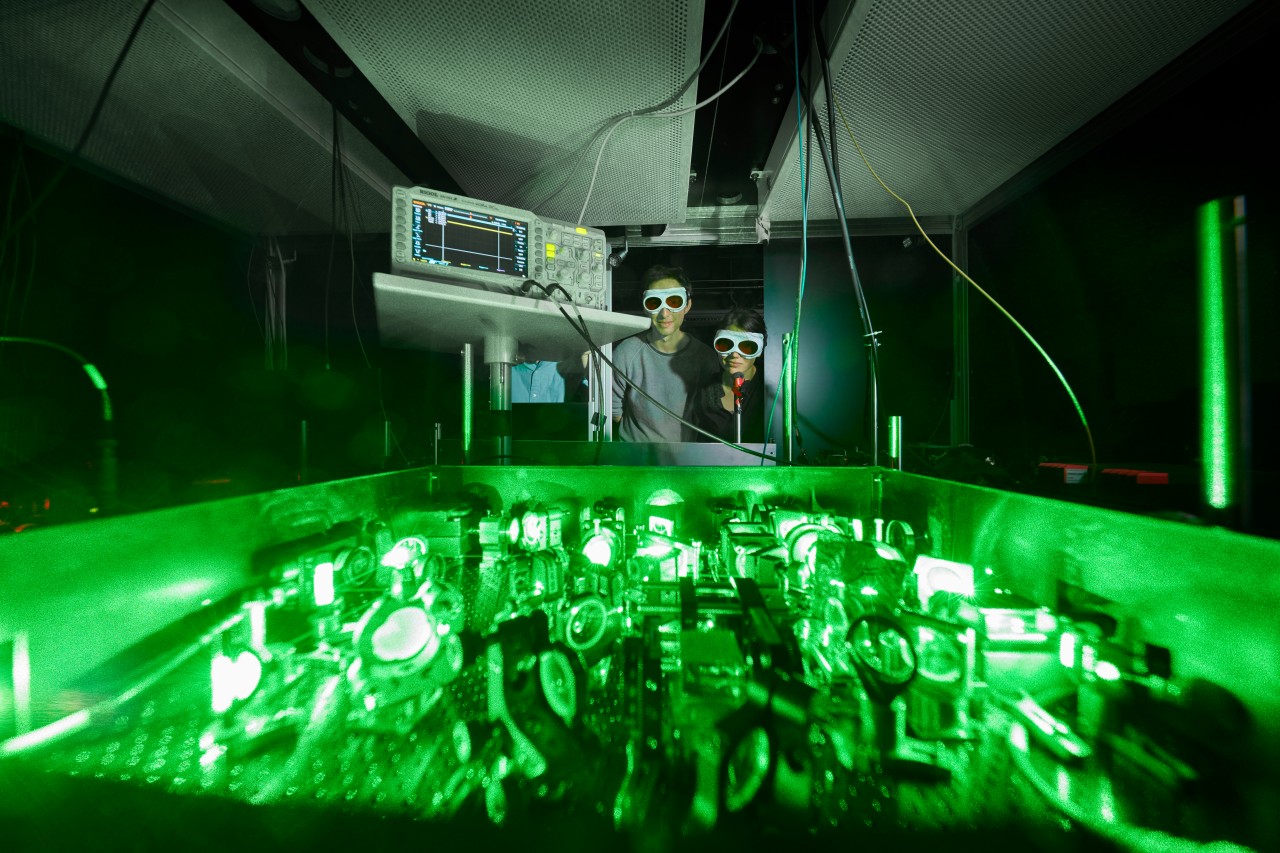 When soap bubbles turn to soup

When soap bubbles turn to soup

With the help of high-resolution microscopy, scientists at MPQ successfully observed the transformation of a metal of magnetic polarons into a normal Fermi liquid. Furthermore, the team was able to measure novel correlations that could serve as a basis for theoretical models of strongly-correlated electrons.

Magnetic polarons are prime suspects to be responsible for the emergence of high-temperature superconductivity in copper-oxide ceramics. Magnetic polarons are quasiparticles that you can imagine as soap bubbles floating around in a room. To date, the interplay of these bubbles remains poorly understood: what happens, for example, when several bubbles clash against one another? Do they burst or do they melt together? And what happens if you start filling up the room with more and more bubbles? In order to answer these questions, scientists at MPQ synthesized corresponding artificial materials in their laboratory via quantum simulation and then analysed them microscopically. The researchers were able to show that, at a concentration of 30% or more, the bubbles resolved into something similar to soup: the Fermi liquid. This is a well-known state of electrons and very common in nature, e.g. in normal metals such as copper. In the context of their experiment, the researchers were also able to measure novel correlations that could help to develop efficient theories of this transformation and its link to high-temperature superconductivity.

More than three decades after the discovery of superconductivity, i.e. the loss-free conduction of electric current, in copper oxide ceramics at exceptionally high temperatures, these materials and their exotic qualities still raise fundamental questions. In order to be able to unravel how superconductivity works in these electronic systems, it is necessary to understand the unusual metallic states above the so-called transition temperature. The transition temperature refers to the temperature at which superconductivity is developed. Simply put, many of these phenomena such as superconductivity develop when you create holes in a magnet with microscopically alternating polarity, the antiferromagnet. Since holes disturb the magnetic order locally, one single hole in such an antiferromagnet is sufficient to create a so-called magnetic polaron. A magnetic polaron, then, is nothing more than a hole surrounded by a cloud of distorted magnetism and that you can imagine as a soap bubble. The number of holes can be controlled by the doping. Exotic phases develop upon lowering the temperature of an antiferromagnet with several magnetic polarons. Even today these and other fascinating effects have not been fully understood, but it has been established that the interaction of several polarons at elevated temperatures, as well as the question as to what happens if there are too many of them, play a significant role.

Scientists of the Many-Body-Division at MPQ wanted to investigate what happens to magnetic polarons at elevated temperatures when the doping becomes stronger: how do the correlations between the holes and its magnetic surroundings develop? For the first time, the study also looked at correlations of higher order (i.e. between more than two points) that characterize the interaction between polarons. The quantum simulator that the research team utilized for the experiment uses controlled laser beams and magnetic fields, in order to trap and manipulate lithium atoms in a vacuum, as well as make them behave like electrons. The lithium atoms in the optical laser field, therefore, mimic the behaviour of electrons in the material. The researchers then took a photograph of the atoms in an optical lattice, in order to measure both the position and magnetic orientation of each individual particle. With the help of tens of thousands of such images different correlations can be analysed. A unique advantage of the research setup at MPQ in Garching has been the fact that the scientists were able to measure both the position and magnetic orientation of every single particle. This meant that for the first time it was possible to reveal microscopically at what doping and in what way the system of magnetic polarons is transformed in a normal metallic state, the Fermi liquid. Additionally, the research team was able to measure various correlations that can be used as a basis for theoretical models of strongly-correlated electrons. In typical experiments with real materials such a microscopic study hasn’t been possible so far.

Naturally, these discoveries lead to new questions. As a next goal, the researchers want to lower the temperature of the artificially replicated materials even more in order to investigate further the physical rules close to a possible transition temperature to superconductivity. For example, the scientists might investigate if and how magnetic polarons are attracted at even lower temperatures. Metaphorically speaking, it might be possible to observe how two bubbles attract one another and melt into a soap bubble pair.